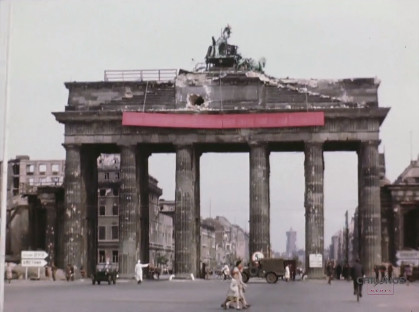 If you’d like to visit Berlin today, check out this link for Things to do in Berlin and to see the sights or get a guided tour.

If you’d like to see a fascinating colour video of what Berlin was like at the end of World War 2, view this video. They have come a long way. 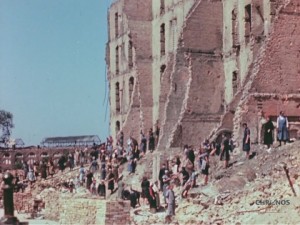 The scale of the destruction is enormous, yet people are busy at work. People aren’t waiting for things to be done for them, but are getting on with clearing the rubble and rebuilding. Such spirit!

This video of Berlin & Potsdam in July 1945 contains footage taken from an airplane flying over Berlin as well as street scenes filmed from a road vehicle as it drives through the city. One can see people busily going about their business, and clearing rubble from the many collapsed buildings. The scale of the destruction is truly shocking and the immensity of the rebuilding task facing the inhabitants becomes clear as we see street after street and block after block of bombed-out, collapsed and burned buildings.

The Brandenburer Tor (Brandenburg Gate) is also shown. It has suffered some damage and one section has a hole it in where it must have been hit by a shell. Some of the stonework has fallen away, and the bronzework chariot on the top is also showing battle injuries.

It is clear from the video that the military is maintaining a visible presence in the city. Soldiers are present on the streets and signs designate the boundaries of the different sectors (British, American, Russian) into which Berlin was carved at the end of the war.

The Smiling Spirit of Hope and Rebuilding the Future 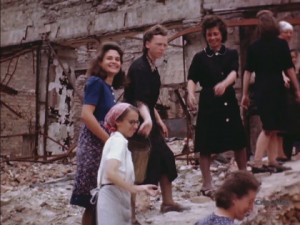 Some people in the video are shifting buckets of rubble down the human chain, and despite the fact that this must be physically exhausting and repetitive, some of them have genuine smiles for the camera. One can only imagine that they must feel some joy that the terrible war is finally over.

Berlin and Potsdam after the apocalypse in colour and HD – 30 minutes duration. from Konstantin von zur Mühlen.